Over the past, prolific decade, Nicholas Hlobo has engaged in richly enigmatic conversations with his audience that explore themes of sexual and cultural identity via the suggestiveness of materiality that compose his evocative artworks. These conversations are complex engagements in that they assemble — and intricately join together — various aspects of who the artist is and where he comes from through the ideas and concerns that they address, which include both Hlobo’s formative cultural environment and his present reality. And that reality is of a gay, Xhosa, South African man living openly in an era of (relative) political and sexual liberation, and the various worlds, at home and abroad, that he consciously enters into and draws from. While not strictly autobiographical in their content, the conversations that Hlobo proposes do intimately relate to the continuing negotiation of his own experiences. By articulating his sexual politics, socio-historical positioning and ethnicity in the diverse worlds that his artworks inhabit, the artist explores desire, imagination and the very potential for transformation.
Born in Cape Town in 1975, Hlobo grew up in the rural Eastern Cape and currently lives in central Johannesburg. These disparate geographical and narrative experiences are deftly echoed in his use of ornately crafted and unlikely combinations of materials. The artist’s now-signature eclectic pairings of rubber inner tubes, ribbon, lace, leather, silicon, organza and satin, as well as occasional found props, have come to represent a growing visual vocabulary of the artist’s concerns. With such materials and their corresponding forms, Hlobo conjures amorphous but allusive imagery redolent of the particular vernaculars of fetishized sexual clothing and objects, of queer dress codes and of Xhosa cultural references. Each new work, whether a sculptural installation, relief “painting” or performance-animated piece, compounds and deepens this vocabulary to communicate a multifaceted reality, and the multiple threads of influence that inform the artist’s identity. Formally, Hlobo’s sculptural works tend to be provocative in their structural allusions. See the often masculine, bulbous, phallic or sperm-shaped forms that his works take, at once organically suggestive and sexually evocative. Almost without exception, the artist’s formal vocabulary bears an external projection: something extraneous that extends or extrudes from the larger, fuller form. These protrusions inhabit space like a type of probe — a thread, a clue, a latent action or perhaps even a bud. Not simply passive augmentations, nor overtly functional parts of the sculptures, these projections nevertheless seem imbued with potential. And it is this very quality that is occasionally realized or enacted during Hlobo’s affecting performances that utilize his sculptural works. These adornments or appendages affixed to dense, sultry drifts of rubber and leather invite the spectator to scrutinize and take pleasure in the surfaces of the artist’s skin-like sculptures, with their alluringly tactile membranes. As Hlobo has noted, “[w]hat is interesting is how rubber tends to take on a shape of its own, despite being cut into a particular shape. It almost resembles flesh in its tone, finish, elasticity, and even fragility for that matter.”
Hlobo consistently posits this potential for “fragility” against the rubber’s apparently solid constitution in numerous ways. See the juxtaposition of delicate, ethereal materials such as ribbon, lace or organza against the thick finiteness of black rubber. Or take one of his earliest sculptures, Hermaphrodite (2002), which features a deflated circular rubber inner tube interwoven at its center with carpet, a bold, rubber fetish tassel attached, and a small, downward-facing wire spring towards its base. The disruption or material contradiction in this work involves the masculine imagery of the sculpture, with its material and formal reference to a “rubber,” or condom, being complicated by the soft, decorative, even feminine tasselled fringe that surrounds it. Altogether, the sculpture is an elegant fulfilment of its title. In subsequent works, however, Hlobo has complicated the rubber’s seeming opacity even more fundamentally by piercing it, either by punching out delicate designs (as in Imtyibilizi xa yomile, 2006) or, more often, stitching and embroidering it with ribbon or other binding materials, thus again obscuring and/or challenging gender stereotypes.

Once exposed as not being impenetrable, Hlobo’s ever-employed rubber suddenly takes on other possibilities. For as much as the rubber and leather function to intuit a quality of membrane, the artist skilfully plays with the suppleness and suggestiveness of their folds and weightiness to create a tangible tension between surface and what may lie underneath. His works entice, in other words. But this suggestion is fuelled by another tension incurred by Hlobo’s use of stitching and embroidered ribbon to bind the pieces of rubber and leather together. Not only is this combination of material and technique aesthetically ambivalent, but what it produces, metaphorically and visually, is the seam. At the most obvious level, the seam refers to a point of (allusive) connection. But these seams can also be read as elusive, as they close off access to that which they bind. The sculptures, then, become a complex join of idea and material; a suture or decoration; a scarification, alteration or embellishment. Rather than skin, the surfaces of Hlobo’s sculptures might instead be looked at as amorphous coverings, as sheaths concealing other figures, human, ghostly or otherwise. This holds true for his sculptures that employ satin, organza or gauze as well, which infer similar forms.
If the seams in Hlobo’s works intimate points of both connection and concealment, they simultaneously offer up the possibility, alternatively, of access. For in their deliberate action of joining and honing in, his sculptures also hold the ability to be undone or pried open — a delicate innuendo. While not specifically transgressive or subversive, his employment of thread or ribbon seems to offer an in, or a passage, to an alternative awareness. In this might be made a visual metaphor for opening access to hidden territory, and the tension between the longed for or imagined and the seemingly inaccessible find their balance here. 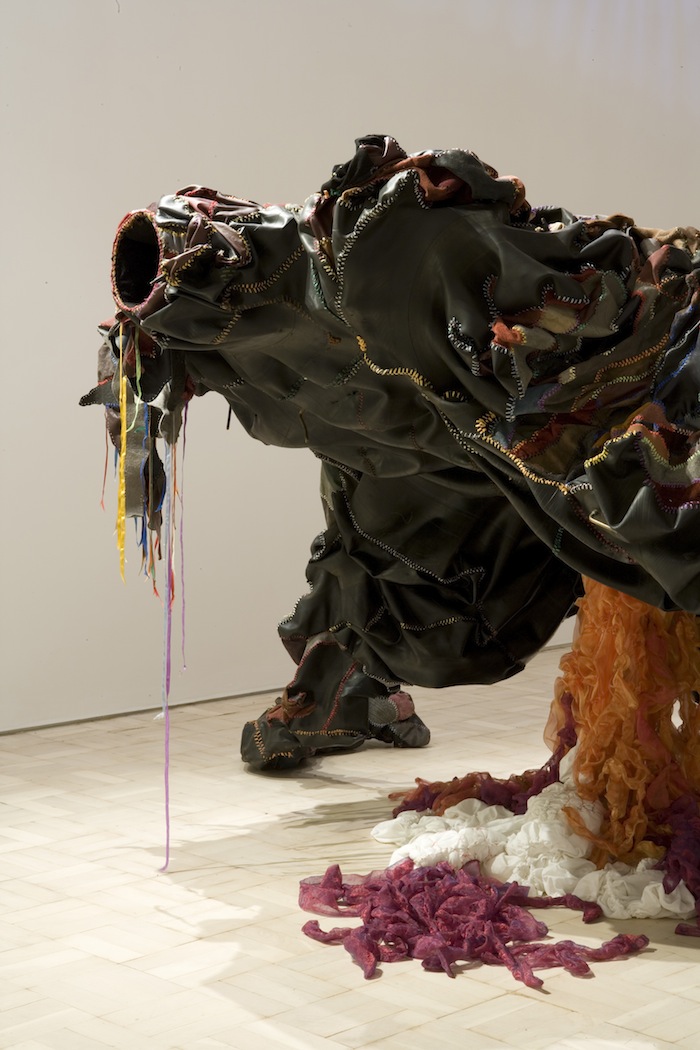 The inference of body or inhabited form is most tangibly fulfilled through Hlobo’s animation of his sculptures — and his actual insertion into them — via performance. If these performances enhance the opacity of the works being animated, they also complicate their potential trajectory. In his earliest performances, Igqirha lendlela (2005–06), Hlobo donned a worn-leather biker’s jacket modified with a large, rubber hump. With the jacket, Hlobo wore a blue ruffled blouse, a skirt made from old neckties and a pair of hand-stitched rubber boots. Invoking the African dung beetle, Hlobo has written that the title of the work “derived from the Xhosa choral song Igqirha lendlela nguqongqothwane. This means that the dung beetle is the doctor of the road … They are not intimidated by having to move things larger than their bodies.” Wearing this dramatic hump in the performances, then, seems to infer that whatever baggage you’re carrying could well be an impediment along your journey to self-realization. Yet, like the dung beetle, there is the positive prospect to still make your way forward. A final elegant inclusion to this attire is a delicate, bulbous, white-fabric head covering that Hlobo wears, which conjures the chrysalis, suggesting that when thrown off, it will have been host to the birth of a newly evolved being.
Another powerful performance suggestive of rebirth or incubation is Mondle Umkhulise (2009), which means “caused it to grow.” Here, Hlobo inserted himself into a tasselled, hanging, womb-like rubber pouch. Rather than interact with or remain visible to his audience, the artist maintained a guarded distance, denying access to his body. Yet Hlobo has also produced a series of works that, though performative, offer performance in absentia. Bhaxa, Iqinile and Ikhiwane (all 2006), all comprise a sofa and chairs, the cushions of which are covered with a molten layer of (ubiquitously South African) green Sunlight soap. Instead of the figure being physically present in these works, the existence of a body/bodies is implicitly suggested through the imprint of bare male buttocks that are marked in the soapy veneer. Ultimately, it is Hlobo’s insertion or imprint of his own body into his sculptures — which may themselves act as his own temporary disguise—that allows the artist to vicariously explore psychic spaces of physical or imagined encounters, and thus to impart meaning onto them. If he activates his sculptures through performance, still they exist before and beyond his transient embodiment of them. Like the striking contrast of Hlobo’s various materials, his presence in these performances shifts between the real and the imagined, between the tangible and the ethereal. As such, his “paintings” on paper and canvas are a further type of slippage of that performative process, of a two-dimensional plane coming into light relief, ready to be explored beneath its surfaces. It is precisely these slippages, or potential peeks — either into darkness, or subtly exposed through the light of language, form or imagination—that are Hlobo’s sustaining conversations with his audiences. And like the materials, forms and words that he proffers as alluring clues, these slippages are threads to be followed and unravelled, or standing as the experience of what they might conceal, imagined. His works probe the edges of identities in formation or evolution, as they simultaneously imagine or intuit their dissolution. Though what is sculpturally or performatively presented may at first appear solid and finite, it is instead along the joins, and into the edges of liminality, that Hlobo’s conversations lead us.