Franz Erhard Walther recalls the winter of 1962–63 as a decisive moment in his career. At the time, the German artist, born in Fulda, was only 23, but had already produced a considerable amount of work and was looking for a change of tack. Nonrepresentational art seemed to him not so much a spent subject as a dead end right from the start. His most recent works at that time, in between painting to sculpture, were almost all monochrome or completely devoid of color. But those rectangles of cardboard, canvas or folded and glued paper, hung on the wall or laid out in a row on a table top, seemed to raise more problems than they solved. Paper and glue brought with them undesired allusions to the tradition of the collage, for example. And his horizontal works, with rectangles arranged in rows and in piles of different heights, implied a whole series of operations like transporting, manipulating and arranging in space that seemed just as interesting as the final form of the work, but found no suitable expression.

As sometimes happens, it was a chance event that showed him the way out of this impasse. Walther visited the tailoring shop of his wife’s parents and there saw forms made out of padded cloth that were slipped inside the clothes to make it easier to press them. Cloth, padding: materials free of unwelcome artistic associations (in 1963, at least) and endowed, by contrast, with a natural affinity with the body and the gesture. Made to be manipulated. Wouldn’t it be interesting to create works with those materials, going along with their nature? 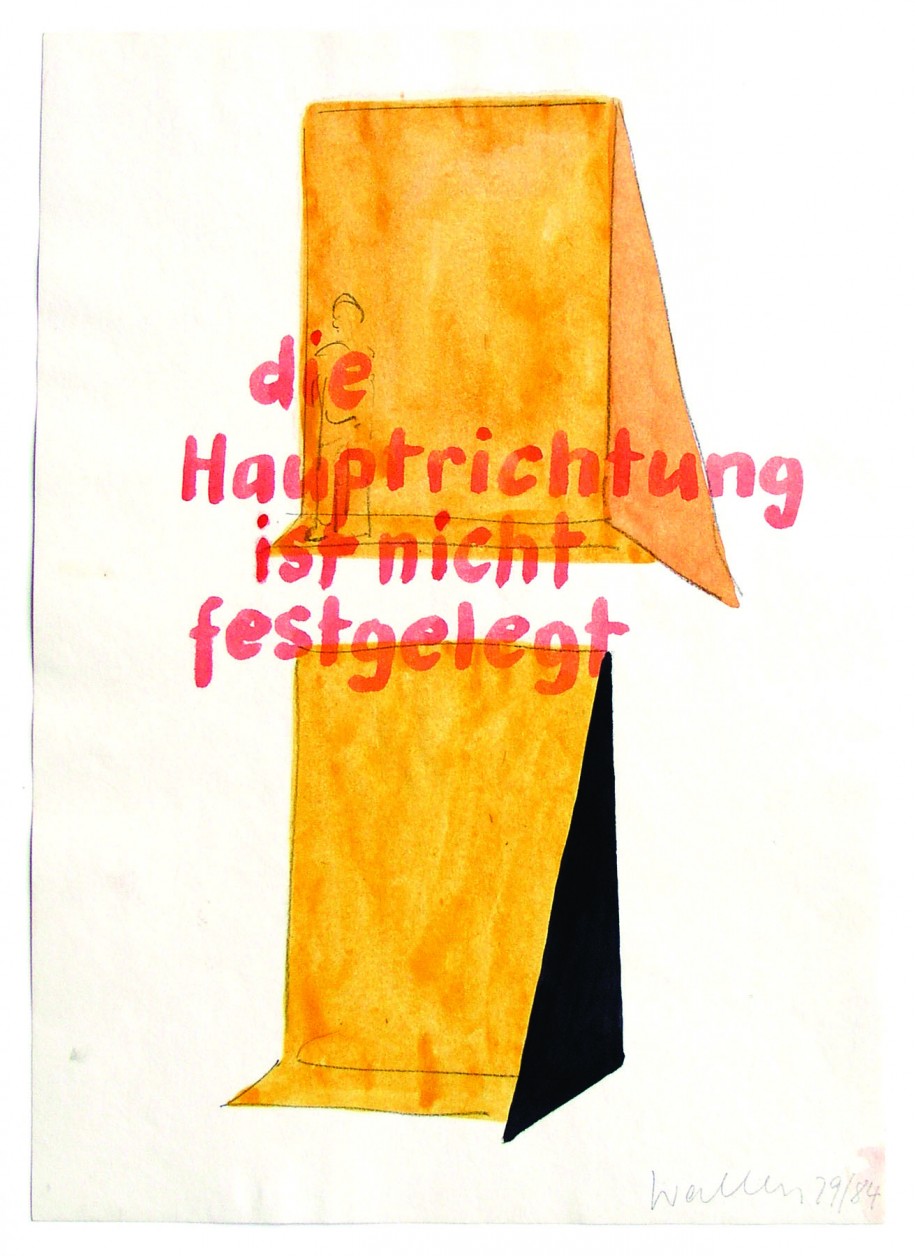 Walther’s friends at the academy in Düsseldorf where he was studying ( the contentious Beuys, as well as Richter, Polke, Blinky Palermo…) were not exactly of the same opinion. Did their colleague want to change his occupation? Was he fed up with being an artist, and had he decided to become a tailor instead? This was the sort of reaction he encountered. (They became much more cautious some time later, recalls Walther with amusement, when a German magazine published the first photographs of Claes Oldenburg’s stuffed objects.) In 1963, despite these misgivings, Walther created Stirnstück, a rectangular cushion of maroon velvet, divided into segments, to hang on the wall. As the name suggests (stirn means “forehead” in German), it had been conceived to be used for the same purpose as a cushion: to rest the head by leaning against it. In short, it was a means of carrying out an action. This was a decided step toward sculpture, reasoned Walther, but first it was necessary to make clear that the sculpture did not at all consist in the object itself, a mere tool, but in the body—of the artist or someone else—that utilized it, for the time in which it was utilized; better still, in the union of both, body and object, over the course of the action.

Stirnstück was the prototype of a series of fifty-eight works, known simply as 1. Werksatz (“First Set of Works”). It is hard to overestimate their originality and innovative import. These qualities were, moreover, recognized promptly: in 1969, the year that marked the end of the series, the works were included in the exhibition “When Attitudes Become Form,” appeared in the pages of the book Arte povera and were shown, alongside the works of Robert Morris, Dan Flavin and others, in the “Spaces” show at the MoMA in New York. Unlike Walther’s Düsseldorf peers, Szeemann, Celant and the curator of the MoMA Jennifer Licht were enthusiastic about those “open” and “processual” sculptures, which could only be spread out in space through the intervention of the public and for the duration of the action. The stuff that made up 1. Werksatz—strips of sewn cloth with pockets and pleats, sometimes padded—found its full meaning only when the visitors, following simple rules laid down by the artist or inventing their own, made use of the pieces: holding them in their hands, lying down on them, wearing them while they walked around. In Celant’s book, Walther declared that he wanted to reactivate the elementary perceptual and aesthetic faculties atrophied by the traditional distinction between artist and public, which relegated the latter to a state of passivity. At the same time, the basic gestures prompted by the works—standing, walking, lying down (the same ones that Trisha Brown, Lucinda Childs, Steve Paxton and others placed at the center of their radical choreographies in the late 1960s)—found further meaning in the Gestalt, the unitary form created by the artist, which tended to transform amorphous space into measure and proportion. This was often a form in the literal sense: almost all of the works in 1. Werksatz are based on simple geometric shapes, like squares, crosses, rectangles, as a reference to an elementary and universal core of human experience. The black-and-white photographs of the time that document the works “activated” in the open air, in expanses of grass stretching as far as the eye could see, look like images of primitive ceremonies for dividing up space. Four people lying on a cross made of cloth with their feet point outward seem to portray the determination of the cardinal points (Zentriert, 1967). Four people linked together by very long strips of cloth to form a square illustrate land surveying (Vier Körpergewichte, 1968). Five people stretching out pieces of cloth to create a parallelepiped herald the genesis of architecture (Kopf Leib Glieder, 1967). At the same time, the works constitute a crystallization of psychological and physical relationships between human beings in space through visual and plastic form, ranging from the relationship with ourselves (Blindobjekt, a cocoon for a single person, 1966), to the dialogue with the other (Sehkanal, a sort of very long hood for two people, 1968) and more complex works that formalized the relations between four, five or ten individuals.

Throughout all this, Walther remained convinced that he was practicing a form of sculpture: radical, completely new, still nameless—but sculpture all the same. “The body’s presence in the work has in any case a sculptural quality,” he was to write thirty years later. Some of the works in the 1. Werksatz series explicitly tackle this relationship, even dragging in the problem of the pedestal with which Brancusi had struggled so hard. Sockel, vier Bereiche (1969) is a square base of white cloth from which emerge, from the knees up, the “statues”: four people standing knee-high in the material. Sculpture as an expression extended not just in space, but in time; the body was conceived as sculpture (and the sculpture as body); the artistic object was formulated as a means of carrying out an action. These concepts, developed early on in 1. Werksatz, reemerge in a large number of later works by other artists. It is sufficient to recall Franz West’s celebrated Passtücke and his “sculptures/anatomical supports” of the 1970s and 1980s, or the One Minute Sculptures of Erwin Wurm (who explicitly entitled one of his actions Make Your Own Franz Erhard Walther). Even Eva Hesse, apparently so remote from the idea of “open work,” seems to have been influenced by Walther: she visited his studio in 1964, when she was still wrestling with painting, and may have taken away some invaluable formal clues that led her to develop her famous soft and sagging sculptures a few years later.

While it is easy to point out the impact and consequences of Walther’s works of the 1960s, it is hard to find any precedents for them, or even parallels in the same decade. Perhaps only Piero Manzoni, light years away from Walther but admired by him, anticipated his ideas with his Magic Bases (1962), conceived as a means of turning anyone who climbed onto them into a statue. And there appear to be mysterious affinities between the route taken by Walther and that of an artist two years older than him who lived on the other side of the planet (and, by temperament and sensibility, in another universe): Hélio Oiticica. Both coming from forms of radical painting and in love with geometry, Oiticica and Walther had conquered real space and time with works made of fabric to be worn and to interact with. Might the Parangolés of the brilliant Brazilian (1964-68) be seen as a tropical, sensual and dancing version of the austere 1. Werksatz? 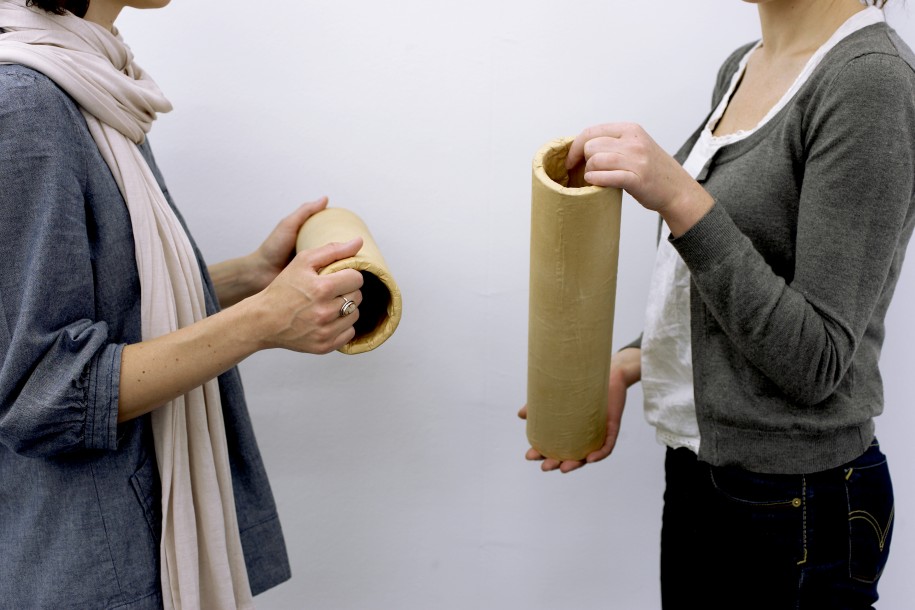 In a long interview conducted with the French scholar Erik Verhagen a few months ago (Cahiers du Musée National d’Art Moderne, spring 2009), Walther took stock of his creations of the 1960s and the works that followed them. Since the late 1970s, with the illusion of a revolution in the relationship between artist and public shattered, and the fabrics of 1. Werksatz transformed from “instruments” for action into precious trophies for collectors, the artist devoted himself to conceiving works in which the interaction with the body of the observer is more limited. The Wandformationen (Wall Formations) of the 1980s, for example, are architectural structures of wood and cloth in bright colors, sometimes equipped with a nook in which the viewer could place himself, concretely or in his imagination. Thus, while the success of the “relational aesthetic,” notes Verhagen, retrospectively renders 1. Werksatz even more prophetic and has led to their rediscovery by museums (most recently, with an exhibition turning around those works at the Centre d’art contemporain in Brétigny in 2008), Walther has declared his “love of the image” and is again exploring the visual dimension. He has done so in his recent works, including Sternenstaubein gezeichneter Roman (Stardust–a Drawn Novel, a diary of his life and works from 1943 to 1973 consisting of 500 sheets of drawings and handwritten texts), but also by showing incunabula of his work prior to 1960. There is, for instance, the astonishing Wortbilder (Word Pictures), which Walther created at the age of 19: drawings in which a word (Bild, Athen, Auge) is associated with a typeface and a color. These works were contemporaneous with Ed Ruscha’s very first pictures with words and make us wonder what other surprises the artist’s vast archives have in store. And above all, what else this 70-year-old man, who is as intellectually lucid as he is affable, and who seems to have inexhaustible energy, will be capable of in the years to come.

The author would like to thank the Jocelyn Wolff Gallery, Paris, and the Franz Erhard Walther Foundation, Fulda.