“And the passionate priest/politician is dangerous, because the high tide is still drumming in his head and ears. But the falling away of belief, and the falling away of commitment, while partly inevitable, still tears—where those beliefs stuck to you, it still tears away the flesh from the bone, metaphorically speaking.”

Not knowing where you are, or even what you᾽re looking at, is central to reading Duncan Campbell᾽s practice. The Irish-born artist᾽s recent film and video works Bernadette (2008), Sigmar (2008), o, Joan, no . . . (2006) and Falls Burns Malone Fiddles (2003) share an internal logic, largely drawing their content from heavily-researched archival footage processed through eidetic editing, to establish an intensely compelling, oblique syntax.

Bernadette is Campbell᾽s most recent and perhaps best known work, a peculiar yet insightful investigation into Bernadette Devlin, one of Northern Ireland᾽s most significant and challenging political figures throughout the 1970s and 80s. Standing on her Socialist slogan, “I will take my seat and fight for your rights,” Devlin was elected to the Westminster Parliament in 1969 at the age of 21, at that time the youngest MP, and to this day, still the youngest female MP ever appointed. Over the next few years, she physically assaulted Reginald Maudling, the United Kingdom᾽s Home Secretary; was arrested for incitement to riot; and was handed the keys of New York by the City Mayor—shortly before passing them over to fellow activists the Black Panthers. Campbell᾽s film is an abstract study of Devlin, with more in common with the poeticism of Scottish filmmaker Margaret Tait᾽s A Portrait of Ga (1955) or Chris Marker᾽s hybrid Sans Soleil (1983) than with straight political depiction. The opening scenes of Bernadette are a particularly good example of this, as the camera traces across unfinished walls and floors, filled with gawping cracks and smudged with streaks of mortar. These structural flaws are periodically overlaid by animated black lines and spots, resembling typographical marks, such as full stops or an emdash. We are disorientated, yet paradoxically, we are being instructed to look (to look, to look closely, to look very closely). 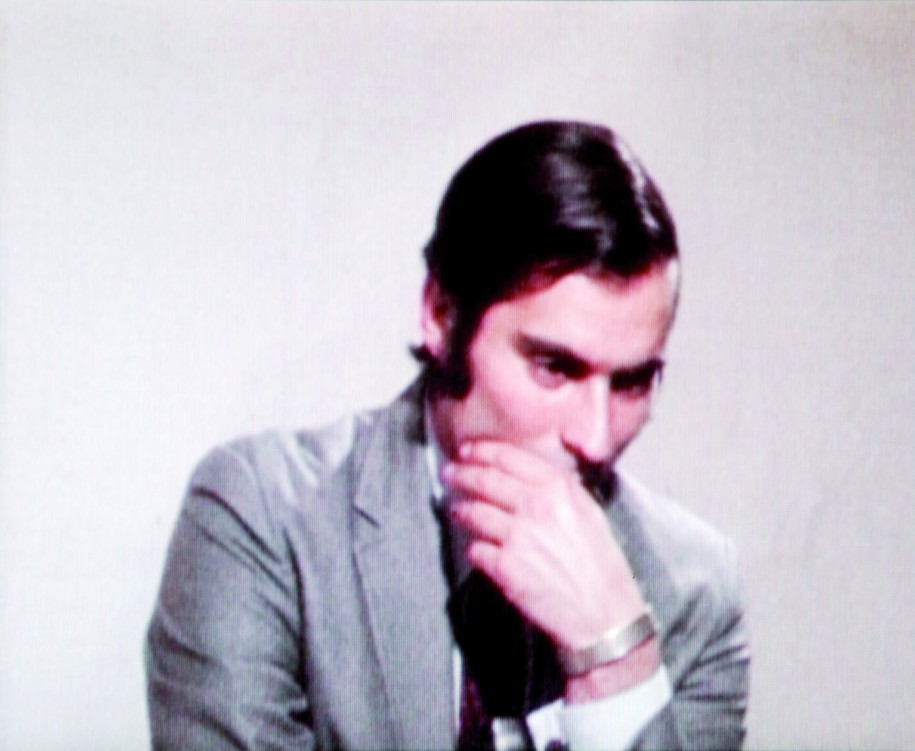 What comes next is largely constructed from remnant footage of Devlin. At first, we see her in what appears to be moments of repose during an interview: glancing off camera, smirking, being “tested” in one way or another. As the film progresses, Devlin becomes more active: we see short journalistic snippets of her organizing Derry community groups to build barricades, camping outside 10 Downing Street, and flying in haste to America.

The film is indebted to Devlin᾽s combative charisma, but is in no way simply reliant upon the authenticity of its archive material. Campbell seeks to undermine representation through the self-reflexive exposition of his sources, rather than through narrative authority: the same scenes are often shown from different angles, sometimes in color, sometimes in black and white, proving that there is, after all, always more than one side to every story.

When asked by an interviewer if she saw a future for herself in politics, Devlin responded, “In party politics I᾽m not interested in a future for myself. In politics of the people, I would like to see my own future as the past few months have been dedicated to the people, and if the politics of the people are on the streets, that᾽s where I will be if . . . ” She stops. Hanging off that “if ” is the very grammar of Campbell᾽s film, and perhaps the whole body of his work: the unanswerable, the ineffaceable, the unpredictable cycles of representation which nudge and graze each other but rarely, if ever, intersect.

In his 1956 book, The Outsider, Colin Wilson outlined how the outsider is a visionary by nature. For starting from the same point (and therefore with the same basic materials) as the rest of his peers, the outsider “very soon soars beyond the general understanding” to a process that is closer in action to transubstantiation than interpretation, more than simply a suggestion of immanence. This raises important questions when considered in relation to the creative appropriation of found footage and images that we, the viewers, are asked to re-contextualize. In Falls Burns Malone Fiddles, Campbell is concerned with this resuscitation, rather than simply reconstruction. The 16mm film is a scrappy corpus primarily composed of still photographs from West Belfast community archives taken during the Troubles. The narrator, Scottish actor Ewen Bremner, engages in an ontological debate with himself: “Pain is my refuge . . . The crisis too would have its holiday, but as the weeks and months passed and the heatwave continued, the mythology of doom and disaster was reasserted with a vengeance . . . ” The voiceover works to keep existential pace, rather than to consolidate the diverse images we are seeing, putting the viewer once again in control.

A succession of found images runs from the clichéd (the burnt-out car and house, the sectarian mural), through the internalized aspiration (the tired basket of silk flowers concealing a stack of bills below), to a kind of subjective rationalization (quasi-ethnographic diagrams that overlay the images). In his essay “Casablanca, or, The Clichés Are Having a Ball,” Umberto Eco has observed, “Two clichés make us laugh. A hundred clichés move us. For we sense dimly that the clichés are talking among themselves, and celebrating a reunion . . . The height of banality allows us to catch a glimpse of the sublime. Something has spoken in place of the director. If nothing else, it is a phenomenon worthy of awe.” With Falls Burns Malone Fiddles, Campbell has willfully removed himself as maker from the work; the political and social tropes, such as they are, do not need to instigate another putsch, for they᾽ve already been involved in one.

Duncan Campbell has often referred to his interest in the work of Samuel Beckett, and Campbell᾽s art is indeed shot through with a high frequency of playful axiomatic, monochromatic Beckettian analysis. However, leaving behind Beckett᾽s wordier and more metaleptic plays and writings, Campbell᾽s work owes most to the steady gaze of Beckett᾽s twenty-five second play Breath (performed in London for the first time in 1969, the same year that Bernadette Devlin took her seat in Parliament) in which a light pans across a stage full of rubbish for the duration of a single breath. In just the same way, Campbell᾽s insistent interrogation of old materials goads something out of nothing.