OKO Gallery, the East Village project space of uptown gallery Luxembourg & Dayan, has hosted a curious lineup of shows, performances and curatorial projects since its 2012 inauguration. Curator Alison Gingeras, formerly of the Centre Pompidou and of the Solomon R. Guggenheim Museum, invited artist Danny McDonald to do the first installation, a Halloween-themed performance replete with a fortune-teller, black light manicures, and songs by Mindy Vale—McDonald’s drag queen alter ego. For the following show, the gallery featured a rotating cast of paintings by Julian Schnabel, where oversize canvases painted between 1978 and 1981 filled the minuscule 110-foot space in two-week cycles. Since then, Gingeras’s curatorial programming has featured the first American exhibition by Polish artist Jerzy “Jurry” Zielinski (1943–1980) and solo presentations of younger artists such as New York-based Dan Colen and Latvian-born Ella Kruglyanskaya. Perhaps most adventurous was Alex Da Corte and Borna Sammak’s re-creation of multiple faux storefronts within the storefront gallery in an installation that starred the beloved Philadelphia “hoagie” sandwich as protagonist. Don’t miss OKO’s current solo exhibition “Even the Most Beautiful Woman Ends at Her Feet” by David Ostrowski, that will run until April 26. (Simone Krug)

“As a matter of fact, artifice was considered… to be the distinctive mark of human genius.” With only a paragraph-long excerpt from French writer Joris-Karl Huysmans’ most famous novel Against Nature (À rebours, 1884) in place of a press release, “I love you Me either,” the current show at Mayfair’s Project Native Informant, London, begins its address to the various binaries of artifice and authenticity. Joris-Karl Huysmans was itself a pseudonym used by French novelist Charles-Marie-Georges Huysmans. The quote is prefaced by a brief laying out of these binaries: desire and excess; circulation and stasis; emptiness and exhaustion. The list of artists participating in the show is more than apt: Georgia Sagri, whose performance at the 2012 Whitney Biennale took place amongst a surreally fragmented array of objects, both crude and technological, in front of a photographic studio backdrop; Dafna Maimon, whose video work One Plus One Is Two Times Half (2012) uses clumsily delivered lines by rigid actors and erratic, slapstick gesticulations to broach issues of intimacy; and Edward Kay, whose bizarre and unsettling portrait paintings present repulsive characters as celebrity or monarchy. The show seems fitting with the gallery’s programme of projects thematized around varying levels of artificiality—from the futuristic, decorative, screen-like works by Petros Moris to Loretta Fahrenholz’s hyper-weird New York apocalypse movie. (Nick Warner)

The romanticized bar/café/restaurant where artists and creatives congregate is an art historical icon. In the 1970’s, Max’s Kansas City in Manhattan served titanic names like Barnett Newman, Andy Warhol, and Lou Reed, while Paris Bar in Berlin similarly hosted Martin Kippenberger and David Bowie. Every important art capital has its own historic brasserie where artists rendezvous, so befittingly Hong Kong has seen the opening of Duddell’s this year. Instigated by young entrepreneurs Alan Lo, Yenn Wong and Paulo Pong, Duddell’s is a multifunctional space home to a restaurant for Cantonese cuisine by Michelin-starred chef Siu Hin Chi, and a space for art events and exhibitions. Currently, the stunning interiors are hosting Ai Weiwei’s first curatorial effort, a group show of thirteen local artists curated on view until February 2014. Entitled “Framed,” the exhibition is meant to reflect the city’s colonial past, and act as both a “rejection and adaptation” of its history, which can be compared to the “relationship between an organ transplant and its new host” as the press release states. While the artwork elevates and embellishes the dining experience, Weiwei hopes that both Duddell’s and this exhibition may also serve as a powerful vessel by which to expose the city’s burgeoning art scene to a global audience. (James Shaeffer)

As a cultural exhibition space in the city of Fribourg, Fri Art has ambitiously exhibited numerous shows for over thirty years. Known in French as the Centre d’art de Fribourg and in German as the Kunsthalle Freiburg, the art center’s mission to promote “mediation between the Swiss and the international scenes, as well as the public” has involved interlocutors like Liam Gillick and Nicolas Bourriaud. Beyond Switzerland they have exhibited in numerous locations in New York City. Since 1990, however, Fri-Art relocated to a 19th-century factory, a gift from the city itself. Their programming is diverse: while this year saw a series of solo exhibitions by Claudia Comte and Jérémie Gindre, Fri Art held a large competition entitled INVENT in 2011 that was devoted to subjects spanning from science, literature, applied arts and more. This year, the institution lost director Corinne Charpentier and hired Swiss artist Balthazar Lovay as their chief curator. Having previously made a huge series of 450 chaotic drawings and a collection of masks, hats and costumes for a fictive Carnaval parade, Lovay recently introduced curating within his practice. After a large group show in September featuring the exhibited artists’ “early” works, Lovay’s current and future programming at Fri Art includes a double-solo show by Hannah Weinberger and Ferdinand Kriweta and a solo exhibition by American artist Jason Loebs in 2014. (James Shaeffer)

Commercial galleries opening education departments, public galleries scaling back their community programs—the boundaries between public and private have become increasingly eroded. As funding cuts have started to take their toll in the UK, privately funded foundations have gained a more prominent role. Over recent years, one can look towards the varied and experimental programming of Raven Row and David Roberts Foundation as exemplary. In April 2013, super-collectors Nicolai Fahm and Frank Cohen opened The Dairy, a new privately funded art center in London. The space in Bloomsbury includes galleries, education facilitates, a shop and an outdoor sculpture garden. The interior has been converted by the architect Jenny Jones, who has maintained much of the original industrial character of the former depot. The Dairy’s first exhibition “Quicksand” was the largest presentation of Swiss artist John M. Armleder in the UK to date and promises to set the tone for future programming. Fahm and Cohen have articulated a desire to see The Dairy become a place for curators to lead an experimental approach, developing solo and group presentations of existing and newly commissioned work from emerging and established names. The exhibition program will be accompanied by an extensive education and public program, including regular screenings, talks and workshops. (George Vasey)

The Dairy currently hosts “Island,” a group show curated by Sarina Basta that runs until December 1.

Although the new Kunsthall Stavanger is not open yet, the program has already started online with a commissioned project by artist and designer Tara Sinn, which hijacked your browser as you move your cursor over it; Frances Stark’s Cat Videos 1999 – 2002, which featured the artist’s cats playing and lounging in her apartment; and the animated slideshow 30 Going On 13 by Micaela Durand. Kunsthall Stavanger, under the new director and curator Hanne Mugaas, will serve as a platform for the production, exhibition and distribution of artworks and events. It’s international focus places equal emphasis on its online program and “brick and mortar” programming. The website will remain as a second exhibition space when the building opens and will include online shows, an active blog and documentation, as well as “behind the scenes” material. The program from November onwards includes Tinging, a solo show by the Norwegian artist Lina Viste Grønli and a performance in collaboration with Performa in New York; Frances Stark’s feature-length video My Best Thing (2011); Yusuke Mashiba’s video Mashibatics (2011); the group show “Hold Stenhårdt Fast På Greia Di! Norwegian Art and Feminism 1969-89;” and last but not least—“Art Cake of the Month,” a desert based on artists favorite recipes, which will be served in the kunsthall’s reading room. (Maaike Lauwaert)

Kunsthall Stavanger will open on November 10, 2013. 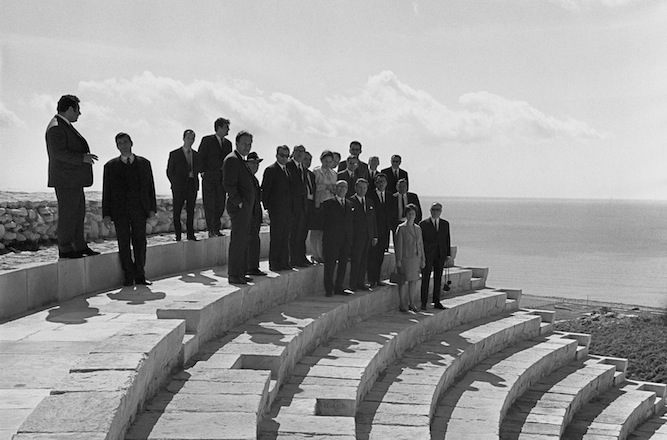 Christodoulos Panayiotou, The Invention Of Antiquity, 2012

The social revolution that enriched Egypt two years ago also affected artistic production, bringing a wave of openness to cultural life. This renewed vitality influenced institutions like Beirut, a new non-profit contemporary art space established in Agouza, Cairo in Autumn 2012 that considers the foundation of an institution to be a creative act. Co-directors Sarah Rifky and Jens Maier-Rothe, along with curator Antonia Alampi, aim to establish Beirut as an experimental meeting place where a wide range of creative practitioners can share critical reflections on their contemporary social, political and creative conditions through a rich program of exhibitions, talks, screenings, workshops and research projects. The project also reflects upon the myriad transitions that mark this decisive historical moment by developing a diverse web of relations with other spaces. Beirut recently curated “The Magic of the State,” an exhibition and editorial project developed between Cairo and London in collaboration with Lisson Gallery. In parallel, the team conceived Indent, a biweekly publication produced with the newspaper Egypt Independent, which hopes to propel changes in reality while challenging the traditional structure of the newspaper. For its third season Beirut has returned to its founding question about the parameters and possibilities of an institution with “What is an Institution? The First Meeting,” which included contributions by FormContent, Bassam El Baroni and Lawrence Abu Hamdan. (Chiara Nuzzi)

Beirut’s Season Four (September 19–December 15) follows a line of flight from asking “What Is an Institution?” to thinking about learning and schooling, in art and in language, in two exhibitions and an Imaginary School Program.

In the geographic heart of Berlin, the former church community ST. AGNES proudly flaunts its Brutalist heritage. Located in a section of the Kreuzberg district that was leveled during the Second World War, the monumental building is preserved in its original state and occupies an area of the city dominated by 1960s housing blocks.The church building was erected between 1964-67 by the architect and Senate Building Director Werner Düttmann for the catholic community of St. Agnes, who moved out long ago. Following several renovations, the building will re-open this autumn as an arts and culture center with the gallery Johann König as a natural landmark. But even before the reconstruction of the vast main church hall, Johann König presented the Berlin-based artist Alicja Kwade’s light and sound installation Nach Osten(2011), “To the East” in English, during Gallery Weekend Berlin at the end of last April. Kwade transformed the monumental, archaic space via an extensive, electrical version of Foucault’s pendulum, using a light bulb instead of a weight. Bearing the historical and architectural significance of the building in mind, the architect Arno Brandlhuber has kept his interventions during the renovation to a minimum, a gesture of appreciation for Düttmann’s design that is shared by the gallery. ST. AGNES in itself was, in a way, Johann König’s very first exhibition. (Helena Nilsson Strängberg)