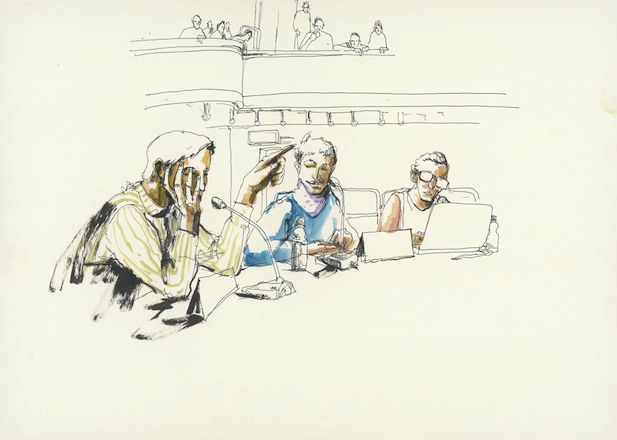 “My wing is poised to beat but I would gladly return home (…)” reads an extract from Gershom Scholem’s poem “Greetings from Angelus (To Walter on July 15, 1921)” in reference to Paul Klee’s painting Angelus Novus (1920), a work central to Walter Benjamin’s “On the Concept of History” (1940). Mary Koszmary (Nightmare) (2007) from Israeli artist Yael Bartana’s trilogy And Europe Will Be Stunned — presented in the Polish pavilion at the last Venice Biennale — calls for a return of 3,300,000 Jews to the land of their ancestors. According to Bartana, “[t]his is a very universal story; as in previous works, I have treated Israel as a sort of a social laboratory, always looking at it from the outside. These are mechanisms and situations which can be observed anywhere in the world. My recent works are not just stories about two nations — Poles and Jews. This is a universal presentation of the impossibility of living together.” During three days last May, the First International Congress of the Jewish Renaissance Movement in Poland (JRMiP), initiated by the artist in 2007, took place in Berlin as part of the 7th Berlin Biennale. Operating as a symbolic parliament to instigate a collective imagining on the questions and demands of the movement, the congress gave rise to a film by Bartana on view for the first time at Secession, alongside new installations. (Anja Isabel Schneider)