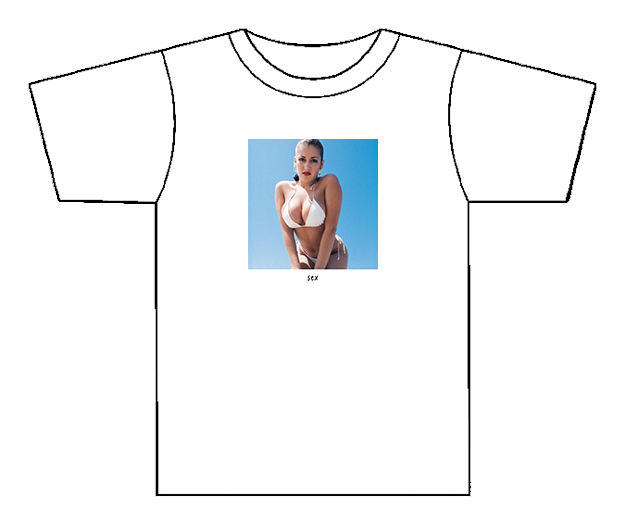 Hanging up in my room right now is a promotional T-Shirt designed by Alex Damianos to promote Sex Magazine, a new free online publication: a white Hanes t-shirt with a crummy image of the busty beach babe from Richard D. James’ “Windowlicker” (1999) single (designed by Chris Cunningham), on which James superimposed his chavvy mug over the model’s face. Except that Sex’s shirt deappropriated the image by reinstating the model’s original face, which looks creepier and more sullen as a result. The gesture captures the pitch and invective drive of Sex, whose first issue was released in fall 2012 as a response to the “stalemate” between Internet and print in contemporary publishing. The current Sex features an interview with Art Club 2000’s Danny McDonald and Berlin fashion label Bless’s Manuel Raeder, a snarky talk with singer Dan Bodan, and fashion/food/photography/film dispatches. Whereas many publishing outfits are embracing digital formats—with a speed that recalls the URL bubbles of the dot-com boom—Penn misses the trashy, speedy, and lo-fi quality of independent publishing culture. Sex, with its straightforward bold Courier font and sparse HTML, fuses these traits with a personal cultish interest in celebs and a consumerist slant. Readers can access James’ now-missing smirk in concentrated form on Sex’s website: the menacing smiley face from an ecstasy pill ☺ that serves as the site’s favicon. (Pablo Larios)