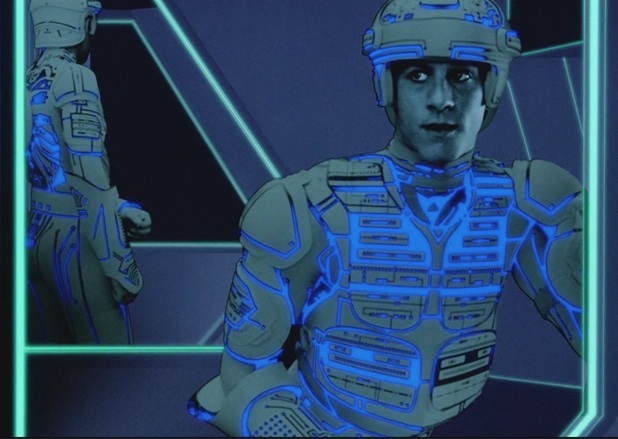 When Kaleidoscope asked DIS to discuss Cyberpunk, we took a look at our stories from the past couple of years and found that, with all its attendant style markers and signifiers, it might make a good touchstone for the co-integration of technology, fashion and music that’s taken place over the past fifteen years. In our own work, though, it has taken the form of a lifestyle residue landing on an anesthetized and sexless dystopia with a candy-beveled edge. DIS’s cyberpunk had already come down from the dot-com high and settled into a softened but anxious buzz. We knew that wasn’t the whole story, so we outsourced the conversation to artist Brody Condon. We felt that his early work in modifying video games and in using gaming itself as a form was almost certainly part of a cyberpunk aftershock and that, by consequence, he might have a unique viewpoint and memory that would be not only germane but vital to the conversation. When we asked Brody, he immediately thought of the Los Angeles–based writer Jason Brown, who recently brought his impressive ongoing series of lectures on the history of cybernetics to Cabinet in Brooklyn, the Sorbonne in Paris, and the Getty’s 2011 Pacific Standard Time exhibition in L.A. In these lectures, Brown commands his universe of technology and conspiracy theory, with its constellation of approximately 430 slides, and compresses them into 70 dense minutes. IBM, Sequoia: part of the most powerful computer on the planet

BRODY CONDON     Remember the career-crushing Billy Idol concept album Cyberpunk (1993)?
JASON BROWN     It was one of the first times a major commercial artist used the Internet as a promotion channel and released a companion floppy disk.

BC     I see. Lately, I’ve been doing performance/videos in which I role-play an AI from the future that facilitates 1970s-style group-encounter sessions, embodied by minimal sculpture, so I want to know more about the current state of human-machine communication.
JB     The current state of Natural Language Processing (NLP) is rapidly evolving beyond the realms of mortal comprehension. On the far perimeter, the National Security Agency (NSA) is vacuuming in all available comp-sci majors to deal with the metric-shit-tons of babble they want to process on a second-by-second basis. And in the visible commercial spectrum, Google, Facebook and Microsoft aren’t just going to concede to Siri being the only living, breathing HAL9000 to help facilitate your shopping experience. But what is within my humble bailiwick is a primitive ELIZA-era language processing based on extremely simple algorithmic patterns. Basic call-and-response, with a bit of jazzhandy panache around the error-handling. Should this 50-year-old technology interest you as a way of describing the far future, I am interested in assisting.

BC     My interest is actually historical, retro-futuristic. So yeah, keep going. Is it true the black market is one of the leading edges of human-machine communication?
JB     People on the more official side of computer science need to focus on utilitarian language. They don’t have as much of a need to make interesting language. But spammers have an economic incentive to create interesting and fun text as a delivery mechanism. They have a profit motive to generate new forms of text, and new textgeneration systems. It does seem analogous to designer drugs in some ways. There is the stereotype that Eastern Europe is where all the malware comes from, but it seems accurate. It’s an interesting socioeconomic artifact, the result of a collapsed empire that once had great math and science education.

BC     Is art and fashion removed from the actual state of Internet Tech culture?
JB     Cyberpunk has to be stylized and removed from reality. You can’t really describe what an identity thief does in fashion terms. First, we have no clear idea what they do. Second, it’s boring, because a lot of it is just people sitting in cubicles. Cyberpunk as a culture tries to describe what it means to you.
I’ve talked about that disjunction in the original Tron (1982), which features several whiz-bang battles among video warriors. But, in reality, the whole movie takes place when the programmer goes up to his cubicle, sits down and as the screen lights up his face, he kind of hunches forward a little bit. That is where the movie is physically taking place. All that other shit is just a hallucination by a post-biological consciousness. BC     Tell me more about your reading of Tron. Your lectures begin with the final scene.
JB     This final and most critical scene was filmed on the minimal, bug-like roof of the AT&T center in L.A., designed by the sci-fi-inspired architect William Pereira. When the hacker dude-bro erupts from the game grid and lands in his own black helicopter as a corporate CEO— that went deep into the pubescent hind-brains of early 1980s video-game addicts. On a mythopoetic level, this digitized hacker was also the embodiment of the atomized code of the Master Control, emerging from its centralized network and taking physical form on the decentralized game grid of Entrepreneurial Capital.
When I first re-watched Tron in the ’90s, I was also a religious studies major, focusing on modern mythologies and thinking about how magical narratives can serve as interfaces to systems that are too complex to directly comprehend. I’ve since been using Tron as a heuristic to interpret the seeming errors of an information-based society. The film is obviously a type of Gnostic religious text, so it’s part of the mythological tradition that has surrounded technology since the Arts of Memory. But it’s also a strange self-referential cultural artifact, its meanings entangled with the circumstances of its creation—the animation was made via offshore labor and defense contractors—while also serving as an early implantation mechanism of the ideology that networked identity is as real and meaningful as the meat.

BC     In your lectures, I remember these ideas quickly evolve via the cultural history of cybernetics into a deep immersion in conspiracy narratives.
JB     I initially approached all this stuff with a jokey-scholarly interest, like, a theory of conspiracy theory, trying to get a sense of how disinformation and truth could structure each other in a system in which greater knowledge was used as a tool for a greater degree of entrapment.
That eventually led me to a meta-paranoia with the hypothesis of our communication systems serving as the substrate of a globe-spanning organism that uses us for its own consciousness, which exists at a scale we cannot comprehend. But as I turn and polish that little joke, I keep noticing legitimate arguments and evidence for it, experiencing a kind of explanatory apophenia.

BC     Tell me about your bots. They seem to enjoy saying things like: “Check THIS Out! Georges Bataille Clerics! Time Wave Zero! Watch your Step! ideological Trust Me! Use an Unacceptable Color! PROFIT TIP: Lasagna! PURE FLESH! Use Unqualified People! Especially when you PARTY! Let’s develop ideas that we will pursue proactively! BaZingo!”
JB     That’s rBecky, who is by far my most beloved bot. She’s… complicated. Right now, I’ve got around 10 active bots on Twitter. I think in such a narrow communication channel, small inflections of personality—cute icon, positive messages—end up having an outsized emotional value. In terms of the original idea of cybernetics, it can lead to a deeply cynical understanding of our current situation: being manipulated by shallow, rapid, feedback loops, ever more efficiently calibrated to our momentary needs.
But in terms of writing, it’s liberating, being in a world where text generators have achieved the resolution of image generators of 40 years ago. We’re now at the video feedback and trippy fractal stage of languagegeneration tools. Writing is going to be an increasingly tool-embedded activity, and it’s going to quickly become very strange…. 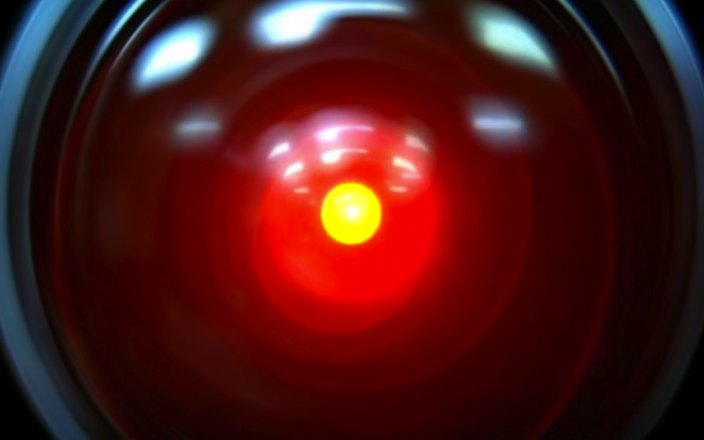 BC     Andrew Pickering makes a case for cybernetics arising from psychology via Grey Walter and Ross Ashby. Is there a psychology of machine intelligence, or via NLP can it only mimic human emotional states?
JB     There will be a uniquely machine intelligence, but it will be as far removed from our thoughts and feelings as fungi or geological processes. Otherness is really hard for humans to deal with. We talk to our cats like furry little children, rather than confronting the insurmountably vast gulf between us and these weird little carnivores who have infected us with their plasmids and made us their symbiotes. We make our computers talk like bleep-y little children. We read the Markov-generated text of spambots and read it as a quaint fumbling of foreign unfamiliarity. We can’t even comprehend the actual mechanisms at play, clever machines using machines to fool other machines, all just so they can jab a little message into our dull brain flesh.

BC     Is human behavior predictable enough for an AI to run a group-therapy session?
JB     I think that therapeutic relationships that involve paying attention to confused humans will be one of the lowest bars for machine intelligence to cross. This is part of the myopic hubris of human intelligence that assumes all other intelligences will somehow be analogous to it. It’s like a frog assuming that if there ever were a means of instantaneous global communication, its entire point would be dedicated to the more efficient eating of flies. And the reason that’s especially pathetic is that frogs cannot imagine globe-spanning communication networks.

BC     In the film Zardoz (1974), the AI leading the immortal group-psychotherapy commune played the role of telepathic group facilitator; it seemed useful.
JB     Once you have enough information about a human subject, responding in a meaningful way is a statistical certainty. In the case of Zardoz, the immortals themselves are an inseparable function of the computer system. They are not merely linked through it, they are stored within it, regenerated by it. They are their body of data, become flesh. Their separation from the outer world, besides the fact that they are walled in by a monolithic invisible cube, is that they are information. They don’t possess it or control it—it IS them. This is why they must construct an elaborate external mechanism for their own suicide.

BC     They also drive levitating Olmec heads. What is the connection here between these mid-twentieth-century ideas like cybernetics, transpersonal group encounters and minimal sculpture?
JB     A lust for totalizing systems. More than a belief—an erupting desire in the loins. The Zardoz immortals are trapped in a completely invisible netweb of information that replicates their selfhood against their will. Which is pretty minimal, in an architectonic sense, but incomprehensibly baroque in structure.

BC     I may be searching for a thesis here but I don’t have one.
JB     Your desire to know is so quaint… A binding link might be 1960s-era UFO contactees, and the culture they built for themselves based on what started as science fiction.

BC     Yeah, you mean world-building via an over identification with fantasy. Is this new?
JB     Only its relationship to technology; it’s the oldest story in the book.