«The illusions and fictions that take shape around forms respond to a given reality and they engender in their turn forms where the images and legends are projected and materialized in real life.» What do you think about using this Jurgis Baltrusaitis quote[1] for opening this discussion of Raphaël Zarkaʹs work?

This dynamic conception of forms seems to me rather close to his approach. While his works evoke spaces, objects, other works and real or fictional images, they demonstrate an interest marked by the combination of various trajectories in space and time, as well as quotidian forms from art history, science or literature.

In other words, a subjective practice, which combines forms from nature and man, with extensive histories and uses.

Yes, because while his practice takes shape in various mediums (photography, sculpture, video, writing and installation), one of the keys to his work resides in a collection of forms haunted by historical, scientific, and cultural resonances—a collection conceived in terms of a temporal collage, ranging from skateboard ramps embodying concrete waves to Platonic bodies, modernist sculpture and Galileoʹs scientific apparatuses.

I agree, but even if this collection of nomadic forms seems identifiable today, it wasnʹt programatically assembled. Itʹs more of an open series of coincidences than a pre-existing, defined typology.

Les Formes du repos (Forms of Rest) (2001–ongoing) presents a pretty precise image of these récurrences dérobées.[2] Begun in 2001, this is a series of photographs of industrial objects made of concrete and abandoned in no manʹs lands, whose geometric forms stretch back to a certain idea of perfection, as cherished from the time of Plato to Leonardo da Vinci, or to involuntary sculptures whose static curves are paradoxically reminiscent of motion. The composition of these photographed objects reveals a permanent tension between the object and its context, a spatial gap and temporal hiatus brought about by the migration of cultural forms.

That reminds me of the first photo from this series, with two giant rhombicuboctahedrons whose significance has been forgotten—polyhedrons that are emblematic of a certain mathematical perfection in the geometric imagination.

An emblem that resurfaces in the wooden sculptures, Rhombicuboctaèdres (Replique #1) [Rhombicuboctahedron (Reconstruction #1)] (2007), a one-to-one scale replica based on the photo.

And it also shows up in Préfiguration de la collection des rhombis (Prefiguration of the Collection of Rhombuses) (2008), inspired by Luca Pacioliʹs The Divine Proportion (1509), which features two little ready-made metal ‘rhombuses’ set on top of a copy of The Divine Proportion, into which hidden images of this same form in different contexts have been inserted like bookmarks.

These various articulations also show how sculptural his entire practice is.

Definitely, from the documentation of these objects to their covers (in the musical sense of the word), to their replicas, he renews these obsolete found objects with sculptural purchase. 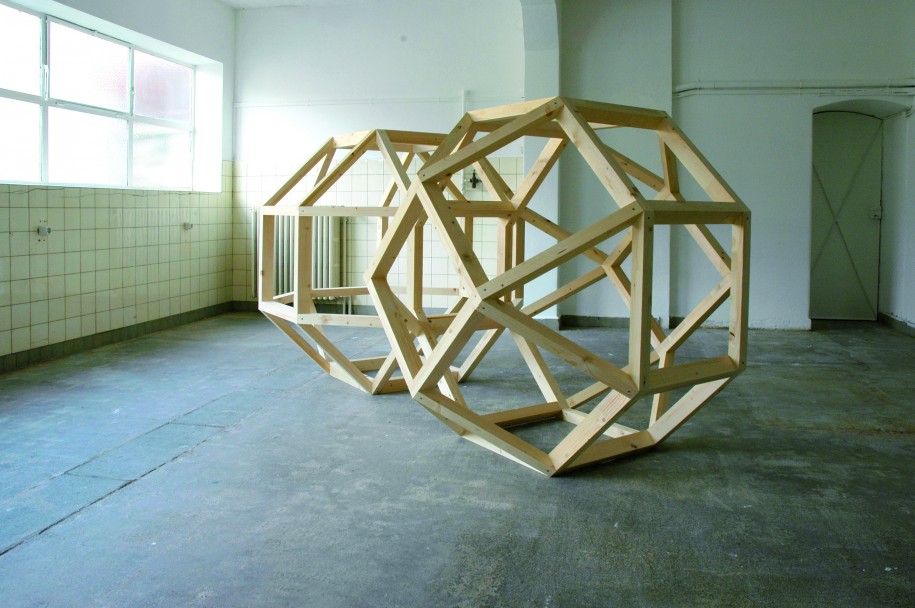 Two sculptures that also bring to mind forms used by skaters, from the half-pipe to the inclined plane.

Youʹre right. These replicas, also deduced from objects, which were nothing but sketches until Zarka handled them (as in the La Déduction de Sharp (Sharpʹs Deduction), 2008 or Les Billes de Sharp (Sharpʹs Beams), 2008), wood cuts of astronomical drawings by the Englishman of the same name) constitute at the same time abstract autonomous sculptures and objects with anachronistic scientific qualities.

In another form of logic, this deductive principle applies as well to his Mystery Boards (2007), which are simple, black-and-white animation storyboards, depicting grids of hypothetical geometry games whose rules could be the abstraction, manipulation and gathering of diverse forms. Nevertheless, although itʹs rare that Raphaël Zarka doesnʹt mention his sources, it would be wrong to say that his practice is citational.

No, itʹs more a method of appropriation, based on the amalgamation of elements joined according to a principle of correspondences. He reinvests these elements with meaning by removing them from their original spatio-temporal context. Thus the dynamic that unites these obejcts—the objective chance by which they are engendered or the space time that separates them—is as important as the elements themselves.

So we come closer to the idea of inter-textuality, ‘inter-formality’ one could say, in that each of the forms that Zarka deploys evokes still others in a kind of endless chain of formal references.

References also present in skateboarding. The two books [3] that the artist wrote on the subject and his last film Topographie anecdotée du skateboard (An Anecdotal Topography of Skateboarding) (2008) address how this activity engendered the re-appropriation of urban spaces as well as the (re)production of forms lifted from aspects of everyday life. This was also emphasized by his project for the last Lyon Biennial: a series of photos of skaters, skating on public sculptures, presented around a 1928 sculpture by Katarzyna Kobro. There, too, it all comes together.

Right, again there is the question of transportation, of transversal uses, repetitions and replications that add to this fragmentary collection, always in motion.

In sum, a collection of vehicles «for ideas which stay the same but which take on different forms at different times, and forms which remain constant but which differ totally in content.»[4]

He couldnʹt have said it better.

2. This expression, borrowed from the title of a work by Roger Caillois, was also the name of an exhibition organized by the artist at Béton Salon in Paris in 2006. The expression can be translated as ‘hidden recurrences’.