From 6 June to 6 July, East London gallery Carlos/Ishikawa is hosting the second solo show of Lloyd Corporation, a collaboration between Ali Eisa and Sebastian Lloyd Rees. Trained at Goldsmiths, and counting solo presentations at Limazulu (London) and Krabbesholm (Denmark), Eisa and Lloyd Ress developed a peculiar sensibility towards the temporality of ubiquitous industrially designed objects. Their installations and sculptures evoke the doom of everyday commodities by displaying them as indeterminate items caught between ruin and artifact. Lloyd Corporation’s scenarios posit an archeology of the future that stems from a distinct strain of thinking about the excessive consumption inherent within global capitalism. Their post-apocalyptic narratives echo the most exquisite of British dystopian thinking, from the literary production of J.G. Ballard to TV series à la “Black Mirror.” Far from the nihilism of those fictions, their art seems to encourage seeking an “alternative” to over-consumption and can be placed alongside attempts to revaluate the pre-history of objects that currently fascinate contemporary industrial designers like Formafanstasma or Max Lamb. At Carlos/Ishikawa, Lloyd Corporation presents site-specific installations and sculptures to recall the bond between commodification and urbanization in the contemporary city. (Michele D’Aurizio)

READ
Ari Marcopoulos “Out To Lunch”
published by PPP Editions

Among the many photographers from the turn of the millennium who depicted youth culture—Wolfgang Tillmans, Tobias Zielony, Ryan McGinley—the Dutch-born, New York-based Ari Marcopoulos has been confronting his characters with their own urban backdrops, to the point of letting his subject’s own personas fade out, leaving the city alone to comment on them: no pubescent bodies, no identity-making process, no commentary on social scenarios, no documentary aims. Most of time, Marcopulous’ art is about the pure abstraction: black-and-white pictures of graffiti tattooing the cityscape. It’s extremely telling. Gallery owner, publisher of PPP Editions, and rare books dealer Andrew Roth has recently released Marcopulous’ ultimate book Out to Lunch. Featuring a small grouping of photographs taken during the ’80s and ’90s, the volume shows the artist’s roots in street photography. More recent, technically-altered and reinterpreted pictures are dispersed within the flow of image, which are also punctuated by high-gloss contact sheets, vinyl stickers, over-sized, fold-out color posters, and even a screenplay the artist wrote together with his son Cairo. The book is printed in a limited edition of 350 copies, each signed and numbered; consequentially, the work is not exactly cheap — it seems that even fanzines must sometimes be turned into coffee-table books. (Michele D’Aurizio)

FOLLOW
The 6th season of the Artist’s Institute: Thomas Bayrle

Receiving a newsletter or a tweet like “The sixth season at The Artist’s Institute is dedicated to Thomas Bayrle” has the power to hit you like something announcing a new era’s advent. Anthony Huberman’s goal as director to structure the program as a sequence of “seasons,” devoting each of these to the inquiry of a single artist’s practice results in offering to a New York audience a daring blend of entrainment and study, pace and laxness that seems far from the gasping schedules of most of art institutions nowadays. To that end, the Artist’s Institute has proven to be a platform where art speculates about art, without inexorably stressing the canonical formats of cultural production and circulation. The “season” focusing on Thomas Bayrle will last until next July. “[Bayrle's] work tries to locate where the individual stops and the ornament begins”, the season’s bulletin reads; “cells and bodies, people and icons, threads and woven fabric, cars and traffic, prayers and religion, image and pattern, sex and porn.” Over the course of the next months, the artist will accumulate new pieces in the exhibition space, leading to a reconfiguration of the display. Meanwhile, a wide range of art practitioners—including Andrei Koschmieder, Lena Henke, Erik & Harald Thys, Jordan Wolfson, among others—has been invited to pay homage to Bayrle. A survey of the artist’s work is running in parallel at WIELS, in Brussels, until May 12. (Michele D’Aurizio)

“So We Came Anyway, in Barrels,” Installation view at Fluxia, Milan, 2012
Photography by Andrea Rossetti. Courtesy of Fluxia, Milan

Marlie Mul (b. 1980, Utrecht; lives in Berlin and London) embraces art interrogatively, questioning its premises — no surprise, then, that she holds an MA in Architectural Theory from the AA School of Architecture in London. The artist’s prints, sculptures and collaborative projects probe contemporary art’s scenarios for production, distribution and reception. In her concern for the social assumptions disguised within contemporary viewership, her works often stimulate a virtuous circle of “art thinking about art” not unlike a hypothetical 3.0 version of Institutional Critique. In 2012, her trilogy of solo exhibitions “No Oduur,” “Stop Being So Attractive I Can’t Get Anything Done,” and “No Oduur (Your Smoke Draws Me In),” held at Space (London), Autocenter (Berlin) and Oslo10 (Basel), centered — with playful, menacing imagery — on the topic of smoking. Many artworks seemed like street furniture colonized by cigarette butts, eliciting a commentary on smoking habits and on the groups these define or exclude. Smoking is marked by a tension between social emancipation and physical dependence: cigarettes were instrumental in the liberation of women, and the design of public spaces is informed by smoking habits. The works approach the topic gingerly yet with shrewd humor. Fluxia gallery in Milan had just hosted her latest solo exhibition, a series of puddle-like sculptures. (Michele D’Aurizio)

VISIT
“Learning from Frank Furness”
at the Philadelphia Museum of Art

Among the most exquisite architects to outline the American urban landscape between the 19th and 20th centuries, Louis Sullivan complemented geometry with ornament in imaginative and unconventional, yet massive and austere buildings. His well-balanced and serene designs — which mix Gothic style and oriental flavor — are undoubtedly indebted to Frank Furness’s eclecticism: a byword of the American diversity that Postmodernist designers would later conjure in their synthesis of “invention” and “tradition,” observed by Denise Scott Brown in her influential essay published in AA Publications’ Having Words. After his formal training at the Massachusetts Institute of Technology and the École des Beaux-Arts (School of Fine Arts) in Paris, and before moving to Chicago and establishing his own firm, the seventeen year-old Sullivan indeed held a job in Furness’s Philadelphia office. Sullivan never tired of telling how much influence Furness had on his design practice. The exhibition “Learning from Frank Furness: Louis Sullivan in 1873” is on view at the Philadelphia Museum of Art until December 30. The show, part of a citywide program of exhibitions and events commemorating the centenary of Furness’s death in 1912, celebrates the commanding effect of the mentor on his pupil by juxtaposing a selection of furniture designed by Furness with drawings executed by Sullivan while in Philadelphia. (Michele D’Aurizio)

The Andersen Museum is a home-turned-museum hosting Hendrik Christian Andersen’s artworks: paintings and sculptures, like bronze and marble statues reminiscent of Byronesque heroes and neoclassical dramas. One can’t fail to mention the artist’s utopian project of a “World Centre of Communication,” a world capital where art would have been a pledge for peace and harmony. It is in this context that curator Luca Lo Pinto invited artist Luigi Ontani to exhibit a complex selection of works, spanning from mid-1960s to now, that juxtapose the grandeur of Andersen’s art with the eccentric, campy and delicate scenarios drafted by Ontani’s imagination. The museum’s ground floor hosts the entire collection of musical masks produced by the artist over the last fifteen years in Bali, which are arranged on Andersen’s titans and surrounded by a soundtrack conceived for the installation by musician Charlemagne Palestine. The first floor displays many of “the young Luigi’s games” (in the curator’s words): from a scenography that the 20 year-old artist realized for a public celebration in his native town (PalloncinArlecchIno, MoulINrouge, CircoCiclo, FascioTubolareareare, 1963) to a series of seven gigantic photographs where Ontani plays off the statues of Michelangelo’s David and those of the Prigioni (Davide i Prigioni, 1970). On view until February 24, the exhibition is a rare chance to encounter the myth of Ontani’s art within a context that is itself mythical: two nearly antithetical artistic practices blending into a unique dreamy and bizarre understanding of art.  (Michele D’Aurizio) 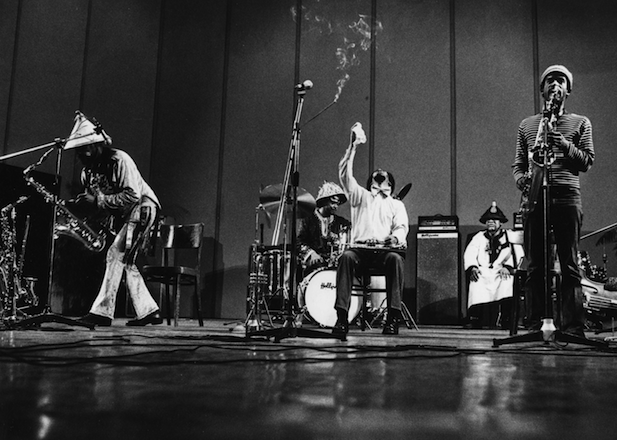 “Music is using sound to organize emotions in time,” Manfred Eicher states in an interview within Issue 26 of mono.kultur. In 1969, Eicher founded the ECM (Edition of Contemporary Music), one of the first record labels in Europe to be headed by musicians, and a byword for a sustained experimentalism at the frontiers of jazz and contemporary music. In just over 40 years, ECM has released more than 1,000 records — including seminal works such as Keith Jarrett’s The Köln Concert, Pat Metheny Group’s Offramp, John Adams’ Harmonium, Steve Reich’s Tehillim and Arvo Pärt’s Tabula Rasa — all acclaimed for a crystal-clear recording and for an atmos- pheric and minimal packaging. On show at Munich’s Haus der Kunst until February 10, 2013 is “ECM — A Cultural Archaeology,” a collection of visual, archival and recorded material celebrating the exploration of sound (and imagery) undertaken by ECM since 1969. The exhibition is rich in music, graphics, photography and even film (ECM has released soundtracks for films by the likes of Jean-Luc Godard and Theodoros Angelopolous), but the concerts series accompanying the display is not to be missed: among others, Meredith Monk, Thomas and Patrick Demenga, András Schiff, Gidon Kremer, Stefano Battaglia Trio, Tomasz Stanko NY Quartet and Jan Garbarek & the Hilliard Ensemble will perform in the mag- nificent halls of the Haus der Kunst. (Michele D’Aurizio)

German artist Jana Euler’s (b. 1982) first solo show in an American gallery will open in one week at Real Fine Arts. Euler’s will be the further episode in a three-year-old program held in Brooklyn. She was trained at the Frankfurt’s Städelschule, and is now at the Wiels‘ residency in Brussels, where her Old Continent gallery, Dependance, is based. She exhibited at Mathew, Berlin; Portikus, Frankfurt; Air de Paris, Paris; Etablissement d’en face, Brussels; Pro Choice, Vienna, and so on. Her work addresses interpersonal relationships in codified environments and suggests that people’s daily lives get stuck in the vortex of networked society, not accomplishing any actual exchange. To paraphrase the title of a series of Euler’s paintings: in the postmodern world, emotions are transforming their own bodies. Notwithstanding the gloomy scenario, Euler’s art is hilarious, exhilarating, satirical. It boasts a sort of hippy cipher hidden in the ruins of the cyber-punk aesthetic: be happy with your body, be happy to be young, be happy to be human. (Michele D’Aurizio)