As one of four artists represented recently in “Taster’s Choice” at MoMA PS1, Nancy Lupo is part of an emerging vanguard recalibrating the production of the art object. Like Gerhard Richter’s 1963 Life with Pop installation, Lupo creates a domestic architecture of furniture: however, rather than address the commercial consumption of art, her work often focuses on latent ideologies and the emotional fallout within commercial consumption itself. For example, marketing’s ability to present the quotidian as fancy, or the influence industrial objects have on behavior are explored through Tuxedo Feeder, a sofa coated with black and white quinoa whose kennel-grade dog bowls embedded in the seat relate properties of control to those forces that inflect the formation of human subjectivity. By abandoning Pop’s mimetic crutch for a process where reality and cultural observations are created through the materiality of the work itself, Lupo does with sculpture what the Pictures Generation did for the image. For example, in Stars, Stiga, Sky Bounce, Sperm, a Rubbermaid bin embedded with ideograms of sperm made of Ping-Pong balls whose brands, intentionally left visible, lend their names to the title of the piece, Lupo tackles the subtext of biological anxiety within recent efforts to brand the body at a genetic level. However, clarity is not always the point, as confusion itself is a common commercial method to cross the wires of our judgment. As a prelude to unlocking some of these mixed messages a keychain floats at the bottom of another Rubbermaid-based work, Double Green; attached, however, is only a meter of ball-chain, the length a nod to Duchamp and reminder that while some experiences can be decoded, for others there is no key at all. (David Andrew Tasman)

Having been an active musician long before getting involved in visual arts, Richard Sides’ activity is not limited to creative production across a variety of media, but also extends into a diverse network of collaborations, curatorial projects, events, performances, concerts and even the founding The Woodmill—an exhibition and studio space in London. Sides often works with various media to explore philosophical ideas of presence, temporality, mathematical structure, metaphysics and human perception. Projects such as the omega point just ate his brains (2013) are like walk-through collages. His installations occur as settings, where the viewer can be implicated as an actor, and where space is occupied as a social event. Sides creates generative systems, primarily using computer algorithms to achieve a specific level of autonomous behaviour, where sound and film introduce a way to play with time, or a particular presence. Just as in “To clear the bush of your garden” (2013) with Steve Bishop at David Dale Gallery in Glasgow, he orchestrates environments in which people can stay for quite a long time, and which open up the potential for them to interact with the work. Yet this dialogical approach continues in Sides’ latest curatorial project “World Music,” also in collaboration with Bishop, at Carlos/Ishikawa in London. The way he collages all these elements is analogous to the way people get together to make music, not knowing whether the result creates harmony or dissonance. (Melissa Canbaz)

Currently, Richard Sides has a two-person show with Ian Law (and a contribution by Lorenzo Senni) curated by Almanac Projects at Cripta 747, Turin. In addition, he will have a solo show at Kunsthalle Winterthur (August 24 - October 12) and his works will be featured in a group show at ICA, London (June 25 - September 7).

New York-based artist Charles Harlan produces austere sculptures and installations out of common industrial materials. In recasting these functional items as autonomous forms, Harlan’s gestures are consistently simple but nonetheless transformative. Much of the work finds Harlan in direct dialogue with the more progressive facets of late ’60s American art, particularly Minimalism and Land Art. For one of his best-known piece, Pipe (2013), the artist installed a one-ton, four-and-a-half-by-three-meter corrugated steel culvert in the small Lower East Side gallery JTT, confounding the viewer’s sense of size and space through strategies adopted from artists like Nancy Holt and Richard Serra; in other works, he echoes Carl Andre’s floor-lain metal works with asphalt roofing tiles (Shingles, 2011) and approximates the pristine surfaces of Donald Judd’s metal cubes using vinyl tract siding (Siding, 2011). Though newly aestheticized, these items’ status as construction materials remains deliberately intact. Whether monumental or unassuming, installed in a white cube or mounted in an open field, the strength of each work lies in its physical presence and relative scale, reminding viewers of the extent to which works of art both shape and are shaped by the settings in which they’re shown. Harlan’s works are currently on view in “Ice Fishing,” a group show at Max Wigram Gallery, London. (Christopher Schreck) Fay Nicolson is a restless artist, working nomadically across print, photography, sculpture, performance, writing and curating. Nicolson combines a research-based approach alongside a formal and abstract sensibility. Her work relies on an economy of forms that are recursively applied to a range of materials, including clay, paper and fabric. Often, her practice recalls historical antecedents across design, art and radical pedagogy. Ultimately—whether it is giving a lecture, making a sculpture, or curating an exhibition—Nicolson’s work is pervaded by an interest in the possibilities of play. There is a dialectical quality to much of the work—hard against soft, straight lines on draped fabric, smooth alongside rigid. Caryatid Variations (Orange) (2014) is typical, incorporating repeated geometric forms screen-printed onto a long sheet of cotton. The artist’s hand is evident in the printing slippages; the autographic mark is continually processed through reproductive technologies. The fabric is draped over the light fixtures and hangs down in to the space dividing the gallery. Alongside her independent practice, Nicolson also collaborates with Oliver Smith, exploring experimental forms of display and dissemination. Recent projects include the group exhibition “Tokyo in the Fall” (2014) at Gerald Moore Gallery, London. Nicolson will be participating in a number of upcoming exhibitions including “Foam,” a peripatetic project curated by Mat Jenner; “ACCORDION” at Laura Bartlett Gallery, London; and “before breakfast we talked about the furthest visible point before it all disappeared” at Tenderpixel, London. (George Vasey)

The work of Jochen Schmith, a collective composed of artists Carola Wagenplast, Peter Hoppe and Peter Steckroth, addresses contemporary consumerism, aesthetic signifiers of lifestyle and luxury fetishism in a way that’s both subtle and razor-sharp. The commercial, the institutional, and the mediated are under close scrutiny in their practice, which ranges from objects and installations to audiovisual works and radical spatial interventions, such as the one they undertook in the Amsterdam artist-run space W139 (It’s Only Rock ’n Roll (But We Like It), 2011): the gallery floor was covered with a rough, ink-black, tarmac-like material mixed with a small, glittering particle. On the other end of the spectrum are works such as There Was a Time (2007), an audio piece consisting of advertisers’ descriptions of luxury housing in Hong Kong; or smaller objects such as Cigar Ends – Collectors’ Waste (2010), a bronze cast of a cigar collected from an art fair VIP lounge. In “Present Gifts,” their current solo show at VI, VII, Oslo, they further investigate commercial and political power structures with works such as Lazy Bones (2014), an embroidered canvas mocking the fake splatters of paint used by designers such as Ralph Lauren and Dolce & Gabbana on their so-called “painters pants;” or with Spinning Object (2014), a carousel of 53 slides listing gifts exchanged between politicians, economists and individuals in foreign states. (Maaike Lauwaert)

In Why is the No Video Signal Blue? Or, Color is No Longer Separable From Form, and the Collective Joins the Brightness Confound  (2011) Andrew Norman Wilson deconstructs the linguistic and symbolic convention that usually communicates the signal’s absence on any screen or projector. In Derridian way he shows that this blue’s metaphysical meaning is generated by an invisible game from which the individual is excluded. The blue’s detracted ontological presence leads to a never-ending displacement of its meaning’s grounds, giving rise to a feeling of precariousness that Wilson relates to our dematerialized environment. Opening up the linguistic level to a broader framework, the New York-based artist explores social arrangements or systems of objects, both seen as taxonomic, regardless of whether they are real or fictious, offline or online. Wilson’s videos, performative installations, screenings and web-based projects employ the communication, aesthetic and operative modes of economic and knowledge production in the semio-capitalist age thus showing, in reverse, their modernist, utopian side. As in Uncertainty Seminars (2013), his most recent “guided meditation” which will be displayed in collaboration with Nick Bastis at Fluxia, Milan, Wilson’s practice encourages us to recognize abstractions and to physically embody them in order to have possibility to participate in an actual adherence, a proximity to reality and realness. (Bianca Stoppani)

Sam Pulitzer, Installation view from "A Colony for 'Them'" at Artists Space, New York, 2014. Photo by Daniel Pérez

Employing media ranging from hand-drawn vinyl transfers to appropriated body jewelry, Sam Pulitzer’s work examines the process by which gestures of counter-cultural transgression gradually become codified and assimilated. For a 2011 show at Los Angeles’s Anat Ebgi, for instance, the artist repeatedly pierced the gallery walls with one-inch gauged metal ear plugs; in recasting the white cube as a bodily form, he questioned the possibility of subversive activity in an environment which aestheticizes, and thus renders impotent, any attempts at nonconformity. A 2012 solo exhibition curated by Michele D’Aurizio at Fondazione Pastificio Cerere in Rome saw him adorning the space with vinyl transfers of stark, vaguely cartoonish illustrations whose allusions to anarchistic politics, goth fashion, punk and black metal music and fantasy literature were translated into highly stylized graphic renderings. Now, an upcoming solo exhibition at New York’s Artists Space set to open on March 16, titled “A Colony for ‘Them’,” will find the artist installing an elaborate architectural labyrinth within the gallery space. Densely coating the structure’s walls with vinyl transfers of various commissioned illustrations and texts, Pulitzer will again ask the viewer to decipher a set of slogans and symbols whose cultural meanings are at once dependent upon and ultimately diluted by the context of their presentation. (Christopher Schreck) 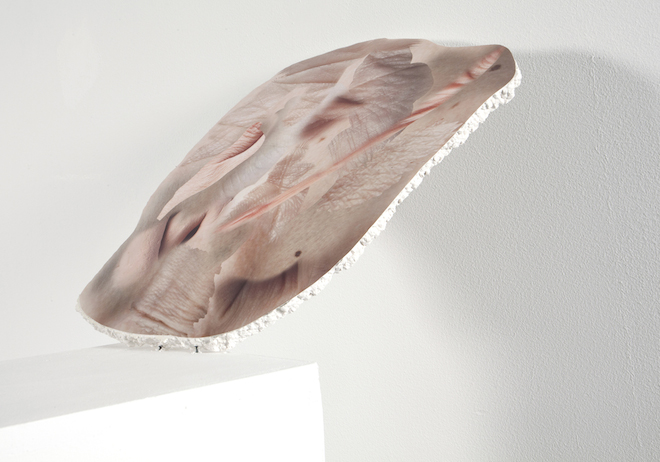 Rachel de Joode is a great connoisseur of surfaces—wet, smooth, crumpled, drooping. The Dutch-born, Berlin-based multi-media artist conflates the mediums of photography and sculpture via photorealist sulpture and sculptural photography. Her works distort familiar structures, lending new shapes to bodies and objects. The human body becomes a geometric box on a pedestal in Color of Me (2013), a Photoshopped collage of the artist’s own wrinkles and pores. Her body is reduced to the dysmorphic state of the prostrate figure in Marcel Duchamp’s Étant Donnés (1946-1966). De Joode employs a similarly hued kneaded terracotta clay, whose contours likewise resemble the lumps and crannies of the human body that mark its surface. Rather than exhibit the clay itself, de Joode’s clay only becomes sculpture in photographs of clay-marked shapes, or on photographic prints on fabric draped over live human models. Her work is at once photograph, sculpture, photograph of sculpture and performance. Objects perform elsewhere, as in Life Is Very Long (2012) where 60 frozen pizzas slowly defrost (and collapse) over the course of the exhibition. In “The New Beauty Of Our Modern Life,” a group show at Higher Pictures, New York, the artist maps the trajectory of the dripping tear in photorealist sculpture. De Joode’s work is also currently on view in “Surface Poetry,” a group show at Gallery Boetzelaer|Nispen, Amsterdam, and in “The Molten Inner Core,” a solo show at Gallery Neumeister Bar-Am, Berlin. (Simone Krug)